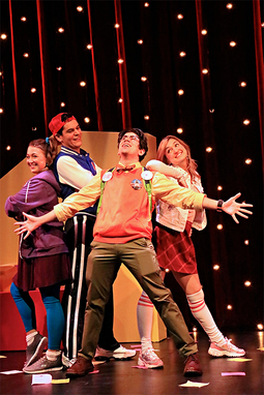 ​As an arts journalist, I've written theater reviews for Time Out New York and have been a features contributor for Broadway.com and the Clyde Fitch Report.

​My writing for the stage has been reviewed or featured in the New York Times, Playbill.com, Theatermania, New York Daily News and other media outlets, as well as covered on WNBC-TV, NY1 and Broadway.com.

As the book writer-lyricist of the kids musical, Mad Libs Live!, I originated the idea of adapting the "World's Greatest Word Game," Mad Libs to the live stage, secured the rights from Penguin Random House, and helped usher the project to an Off-Broadway world premiere run at New World Stages.

Mad Libs Live! is licensed through ﻿Concord Theatricals and the original cast album is available via the Grammy Award winning label, Broadway Records.
​
On the business side of theater, I served for 11+ years as Director of Operations at Broadway Across America, a subsidiary of the John Gore Organization, and one of the world's leading companies presenting first-class national tours of Broadway shows such as Hamilton, Wicked and Dear Evan Hansen where I worked cross-team with marketing, programming, ticketing and internal and external partners.

In addition to my operations role, I was also the editor of our internal newsletter, The JGO Quarterly.

Prior to BAA, I was a booking associate at The Road Company where I was the responsible agent for the North American tour of famed illusionist, David Copperfield.

Interested in learning some basics about the Broadway touring industry? Yeah? Cool! Then check out my popular blog: The Road 101 that I created and managed between 2009-2014.

In addition to my creative career, I'm also a committed arts advocate. As an appointee of New York City Council Member and Speaker Corey Johnson to Community Board 2, Manhattan (CB2) ﻿I have served as the Chair of the Arts and Institutions Committee since 2015. I have also been a member of CB2's State Liquor Authority (SLA) Committee since 2015 and am committed to working with the City's elected officials, small businesses and residents to help support and sustain our unique restaurants, bars and nightlife.

I continue to live the dream in downtown Manhattan in a very small apartment and can affirm that I have no aspirations to become an MD in Gastroenterology.
EMAIL ME to discuss your writing OR VIDEO needs!